REALISTIC DRAWING TUTORIALS WITH JD HILLBERRY
#1 Getting Started
Once you have decided on your subject, you need to decide on the best techniques and materials to use. There are so many things to consider. Should the background stay white? Should you use a smooth paper or rough? Should  you use graphite, charcoal, or a maybe a combination of both. It's enough to make you take up sculpting! Don't get discouraged. This tutorial will answer these questions and more. The first thing you need to do is analyze the textures in all the areas of your subject. Decide which areas would be considered rough and which are smooth. Notice where contrasting textures and values are adjacent to each other.Once you have identified the basic textures and values of your subject, you need to decide on the appropriate techniques to use in each area.

#2 Using Charcoal and Graphite Pencil (why I use both in each drawing)The individual granules of charcoal have an irregular shape. When light strikes a drawing containing these particles, it bounces back in many different directions. That means when it is pushed to its darkest value, charcoal doesn't have the reflective glare that is common with graphite. Usually the darkest values in a drawing are shadows, and, if you are trying to render a subject as realistically as possible, the last thing you want is a shadow that reflects more light than the subject. I use both charcoal and graphite pencil in different areas of my drawings.

My favorite brands of charcoal and graphite, and carbon pencils: (links are below to order the supplies directly from my web site.) 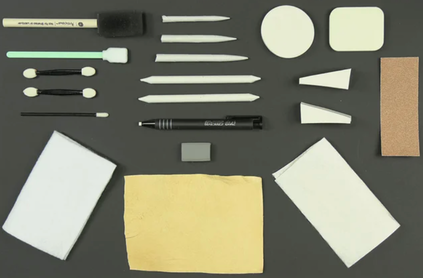 #3 Blending I use various tools to blend with. Each creates a different texture and spreads each medium differently. Using the correct blending tool can mean the difference between using a few quick swipes to create the exact look you want, or, re-working an area for hours (or until you rub a hole in the paper) and giving up in frustration. The photo here shows the blending tools I currently use and they are all included in my Creating Contrast and Texture Drawing Kit

Click on the image to see how you can get my Realistic Eye Tutorial!

Step One:
I am using charcoal for the background and graphite for the subject. I'm using Arches 140 lbs hot press watercolor paper for this drawing. This is one of my favorite papers. It has enough tooth to create dark values yet is smooth enough for very delicate textures. In this first step, I have cut out the shape of my subject(s) in Frisket film and applied it to the paper. Then, I applied 3b soft charcoal to the background to begin creating a wood texture. 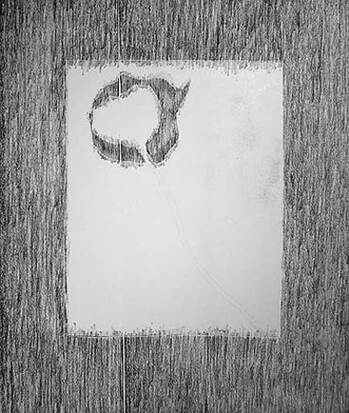 If you are unfamiliar with the use of Frisket film, the video below  will help explain it for you:
Step Two:
Next, I blended the charcoal with a piece of felt and added the beginnings of wood grain. I repeated this several times to build up a solid tone. After pulling out some highlights with an eraser pen, I used a sharp hard charcoal pencil to create shadows to help create slivers and chips in the wood. I also applied drafting tape at this point. I will removing the real tape and drawing the appearance of masking tape in these areas later. Some of the wood texture will show through from the previous step and give my drawn masking tape a little more transparency. 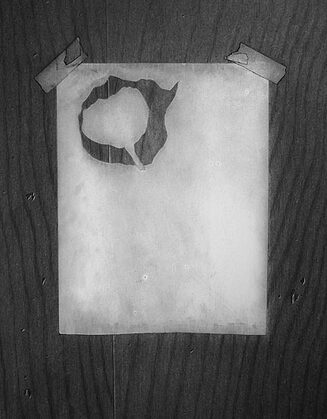 Step Three:
Then, I sprayed the drawing with fixative, peeled off the frisket and began rendering the subjects. I used a 6h graphite pencil to add tone to the paper and blended with a chamois. In some areas, I applied the graphite with the chamois. For those of you that haven’t tried blending with a chamois, it can produce incredibly subtle tones – almost like an air brush. I use a kneaded eraser to pull out the crinkles in the paper. I am using the same technique to render the rose, applying graphite from dark to light and blending.
The tape on the right shows what it looking like after I removed the real masking tape.  I have begun rendering the tape on the right with a General's carbon sketch  pencil and blending with a tortillon. Using carbon here for the tape will help separate it from the wood and the paper. 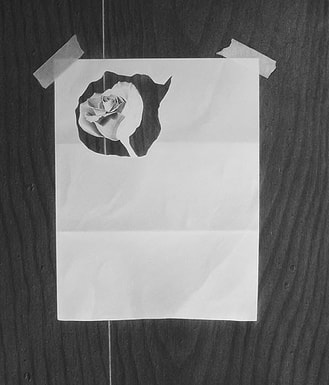 Step Four:
I have started adding the holes and lines of the notebook paper. In case you are wondering, I didn’t darken the background in this step, I had to turn up the contrast on this photo a bit to show the lines on the paper.

I used charcoal for the holes to match the background. Adding charcoal at this stage always makes me nervous since it isn’t fixed and can easily smear. I also continued to add shading to the rose and added the line drawing of the stem.

The lines on the paper were produced with a .3 mechanical pencil to keep them as sharp and clean as possible. I used a French Curve instead of a ruler because the lines had to follow the bends and crinkles in the paper to keep the perspective correct. The best way to describe a French curve is it’s a bendable rubber straight edge.
Step Five:
Here’s the final. I had a real tough time taking photos of this one. I couldn’t get a picture of the softness of the paper shading without compromising the darker background detail. The original has more punch.

I’ve included some close-ups to give you a little better Idea of the detail. In the original drawing the tape is approximately 3/4" wide and the paper is the size of notebook paper. So when people view this drawing in person, it fools them into thinking it is real paper taped up onto a wooden background. 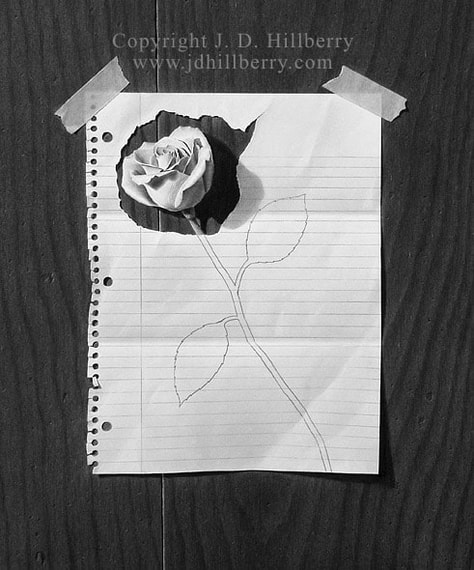 Get updates about Free Tutorials, Live Drawing Workshops, Online Drawing Tutorials, ​Exclusive Discounts, and much more by signing up on my email list below:
UA-172689210-1